Nowadays, staying with one company for more than five years is a big deal – never mind 45! For Karin Åström it is just another day at the office. Explore the evolution of Fjällräven through her eyes, and get her tips about making the most of being at one company long term.

In 1976, fresh from school and her first work experience, Karin Åström of Örnsköldsvik, Sweden, headed to the town’s Fjällräven office. There, she introduced herself, said she was looking for employment and left her grades. She was soon contacted by then Finance Manager Bertil Jonsson, who informed her that he had a job for her in the finance department.

"I started working at Fjällräven September 19, 1976 and stayed for 45 years,” says Karin with a chuckle. 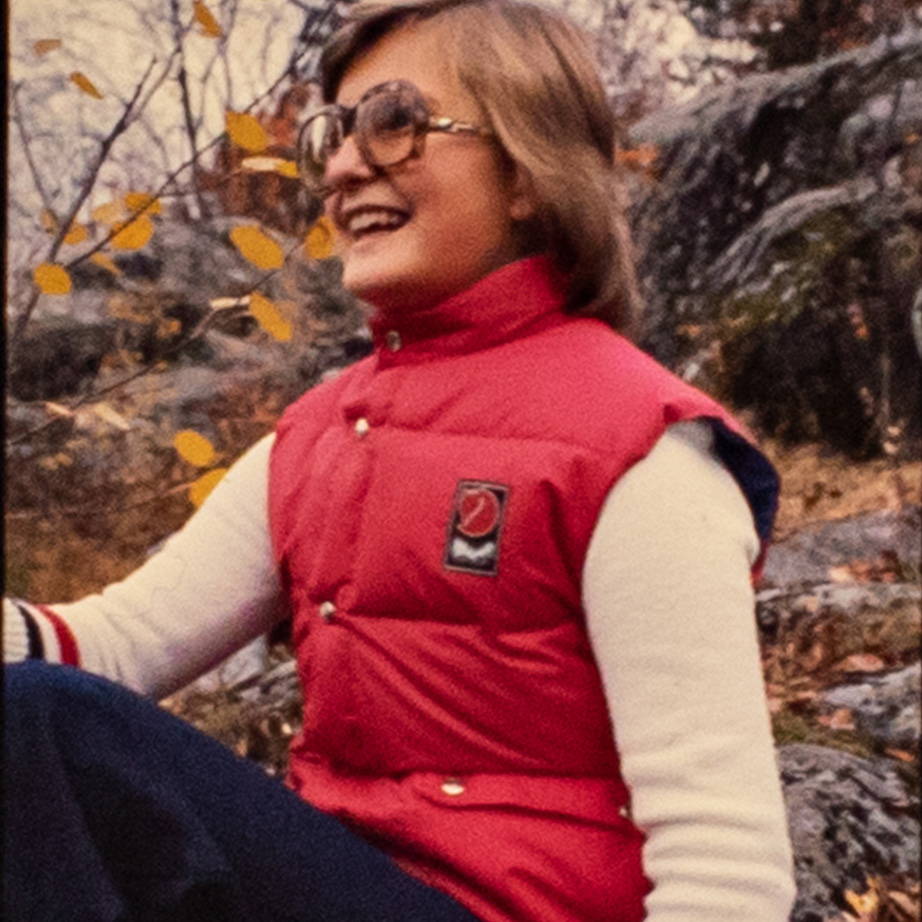 In 2021, after almost half a century with the company, Karin is making her next career move: retirement. During her time at Fjällräven she experienced its evolution from a maker of Swedish outdoor equipment into an international brand. She was there during the development of classic products like Kånken and the Expedition Down Jacket. She saw firsthand how Fjällräven’s gear became a benchmark for well-made, timeless and sustainable design far beyond Sweden’s borders.

“I started working at Fjällräven September 19, 1976 and stayed for 45 years,” says Karin with a chuckle.

As a valued member of the team for so long, you can imagine that Karin has many memories to share. Here, she takes us through a handful, as well as her tips about making the most of being with one company long term. Whether it is five years, or 45.

Fjällräven’s first years were characterised by rapid development. Particularly in the seventies when a large premises was built in Örnsköldsvik housing a factory, warehouse and offices. The expansion required more staff to operate, including Karin. Times have changed: “Today, there are about 60 people working here in Örnsköldsvik for finance, e-commerce and customer service. The warehouse is now a Naturkompaniet outlet.”

The team at the time when Karin started consisted of administrative workers, seamstresses, fitters and warehouse staff. Karin remembers the seamstresses lined up in two rows, working on a piecework basis with their machines in full swing. In another part of the building backpacks were assembled and all the products inspected for quality before delivery.

Sometimes the administrative team chipped in to help with inventory and Karin fondly remembers counting the bestselling Greenland collection in the factory, which was painted blue. Åke’s favourite colour. She recalls, “His car at the time was also the same colour as the factory.”

Being openminded was the key to Karin’s success during her first months at the company. In fact, during her first work week she was recruited to model a down vest for a photo shoot. Though not overly keen to do so, she was new and thought she had better give it a go. It was a wise move. She loved the vest she was photographed in, bought one and continues to wear it today. 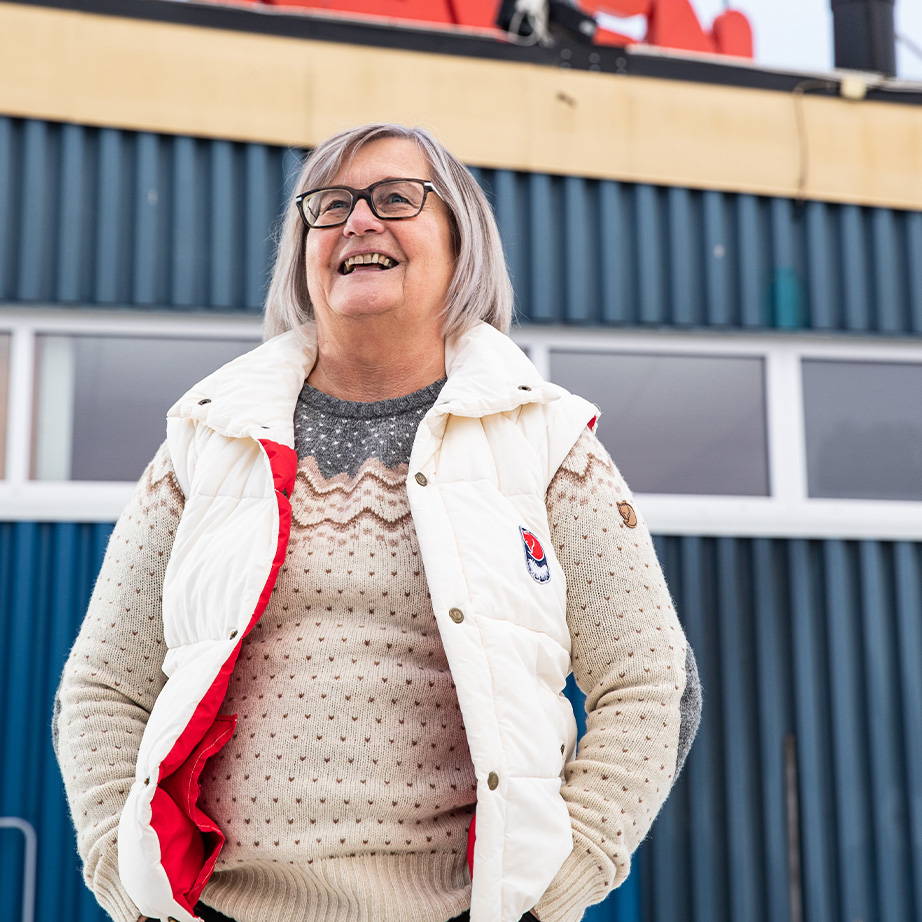 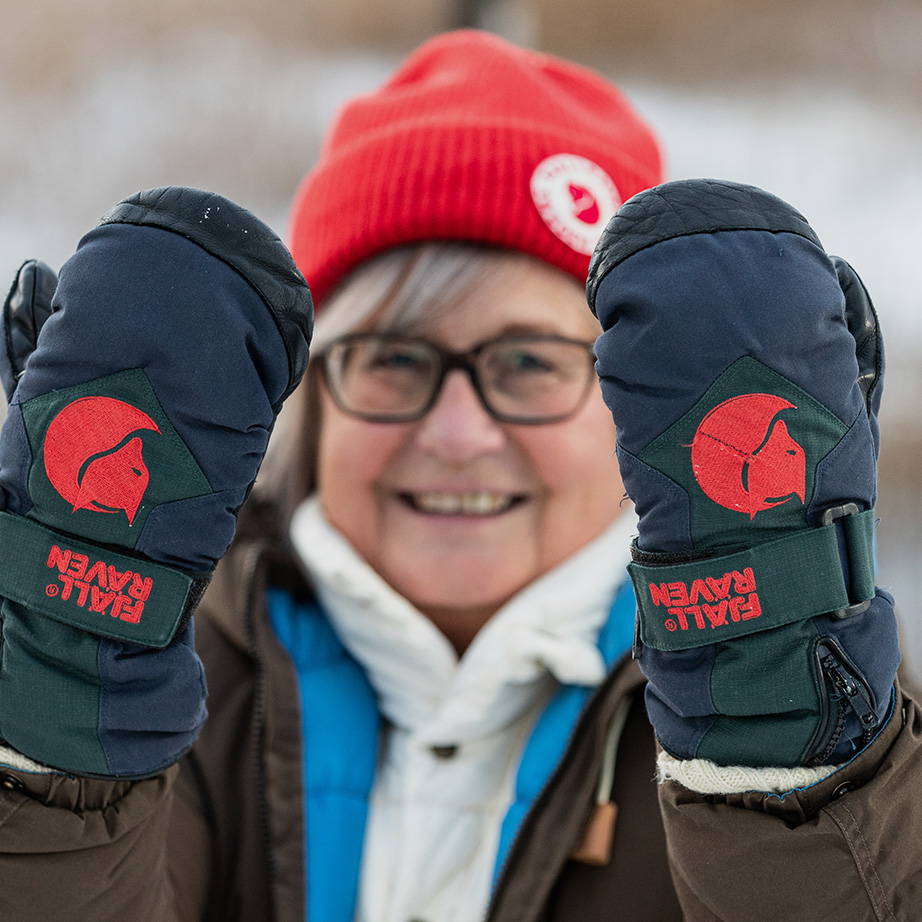 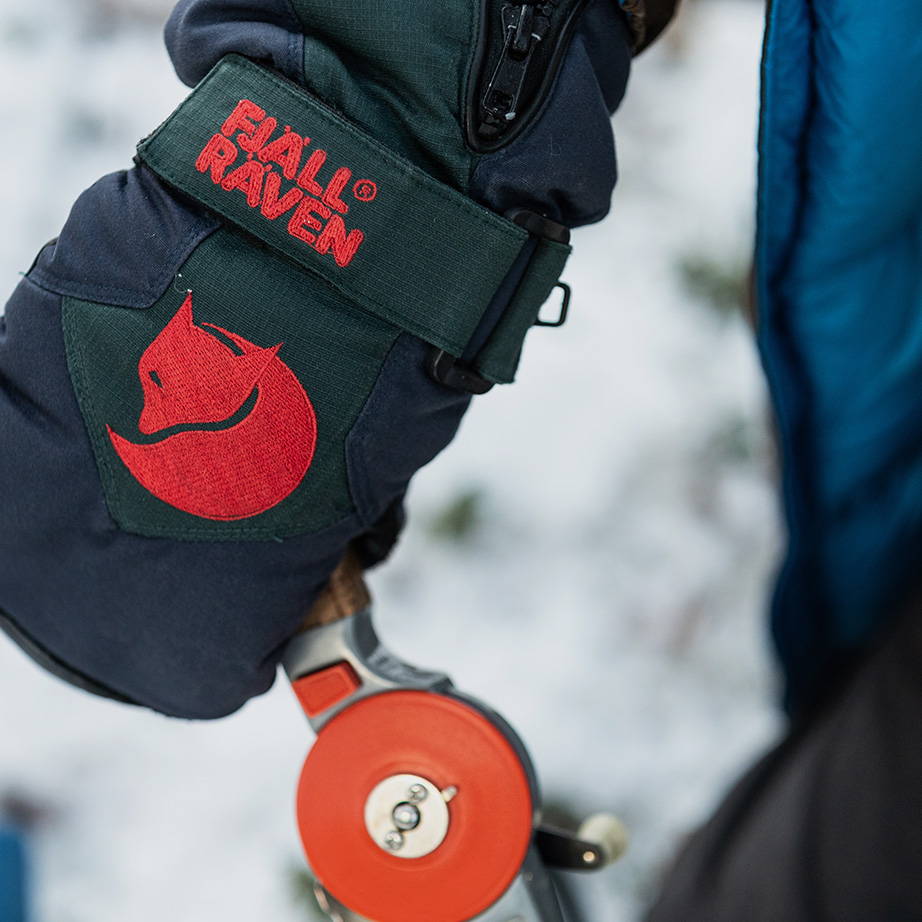 Though Karin was born and raised near Örnsköldsvik, and worked for Fjällräven in Örnsköldsvik for 45 years, her career was varied. Starting in finance, she took care of customer ledgers and invoice registration.

“Then I moved to advertising and worked with Marketing Manager David Edmen for some time. We put the catalogues together. I was also in the complaints department for a few years. For the last 28 years, I have been working in the supplier department.

I have always said that if Fjällräven puts me on the switchboard I would leave, but I never ended up there. I guess they wanted to keep me around.”

One of the more memorable periods for Karin was during the seventies, when some of Fjällräven’s most well-known products took off. Like the Expedition Down Jacket and Kånken Backpack. When the Kånken was launched in 1978, 400 were sold. The following year, as many as 30,000!

“I remember that we sent out the packages by invoice, and at that time we had a data cable between our premises and the bakery Hägges, which was located here. We stamped the invoices and went up with the diskettes to Hägges. There, the diskettes were loaded, the invoices were read and printed out. All the deliveries then were based in Örnsköldsvik and lots of trucks came and went all day long.”

Karin’s tips for staying at one company long term.

Be open. Try different tasks and departments to experience variation even if you are staying in place.

Embrace change. If you work for a large company a lot happens and things shift frequently. Look forward to it because it means you will not get bored.

Enjoy your team. With good colleagues every day at work is a pleasant day.

As with most employment, it is often the people you are surrounded by who make or break the experience. Good colleagues were always a strong contributing factor to Karin staying so long with Fjällräven.

That includes Åke. Looking back, Karin describes him as a straightforward and fair man, who was not fond of those who agreed with him all the time. In fact, he might even say no to an idea even if he thought you were right. He was a hard worker who wanted to be the first in the office, but also wondered why others did not make it before him.

“As a mother, during the toddler years my director let me come in a little later. On the third day of noticing I was not at my desk by seven o’clock, Åke waited at my workspace and asked why I was not there on time. Of course, when I explained the situation, he understood fully. For a few years after that he regularly came to my workspace to check I was there in time – always with a twinkle in his eye.”

He was also a man who wanted the best out of his team and did what he had to do to make it happen. Even if it did not always work out as planned. Karin smiles as she recounts a fond memory:

“Åke heard that people sewed better to quiet music, but the seamstresses eventually got pretty tired of it. When he was not around, the person operating the switchboard would eject the cassette tape of calm tunes.

During that time, to go from Stockholm and Örnsköldsvik so often, Åke would travel by helicopter. When we heard it landing at the entrance, the switchboard would start playing the cassette again and the team would hurry to pull up the awnings and turn up the speakers. It was like we were listening to it the whole time.”

Equipped with many interesting experiences and fond memories, Karin is now ready for the next phase of living and plans to do much of it in nature. Walking in the woods, as well as picking mushrooms and berries are at the top of her to-do list. Ice fishing is too, as it is a popular winter activity in the nearby lakes and mountains. 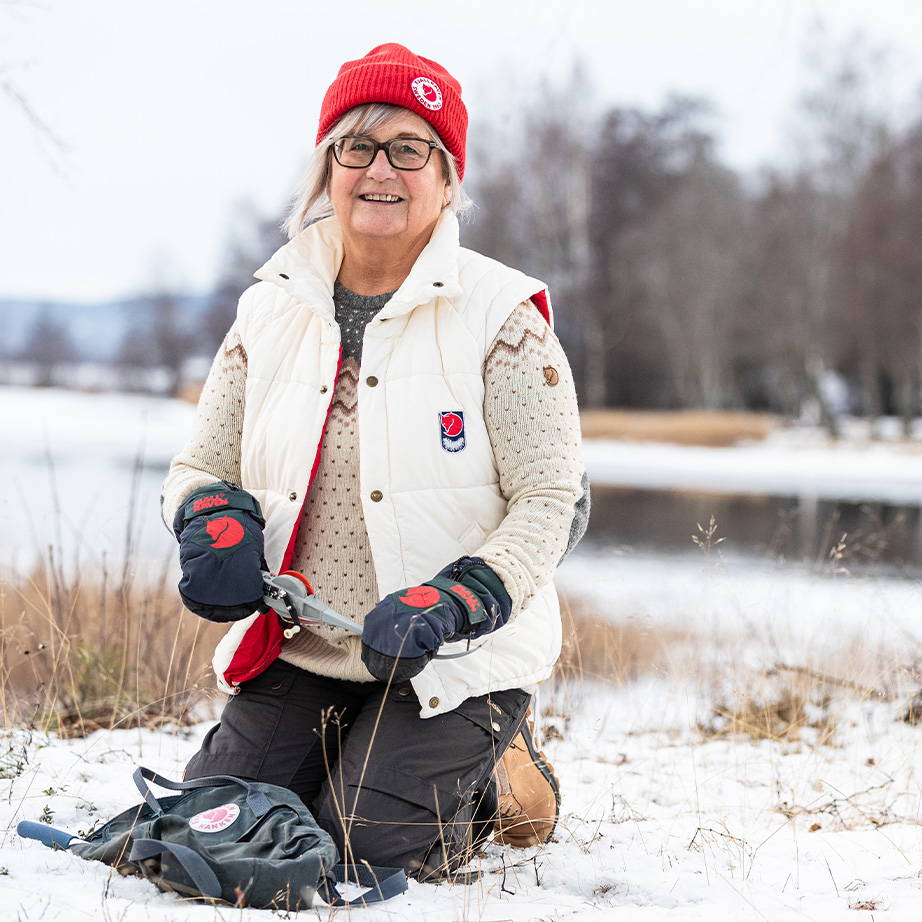 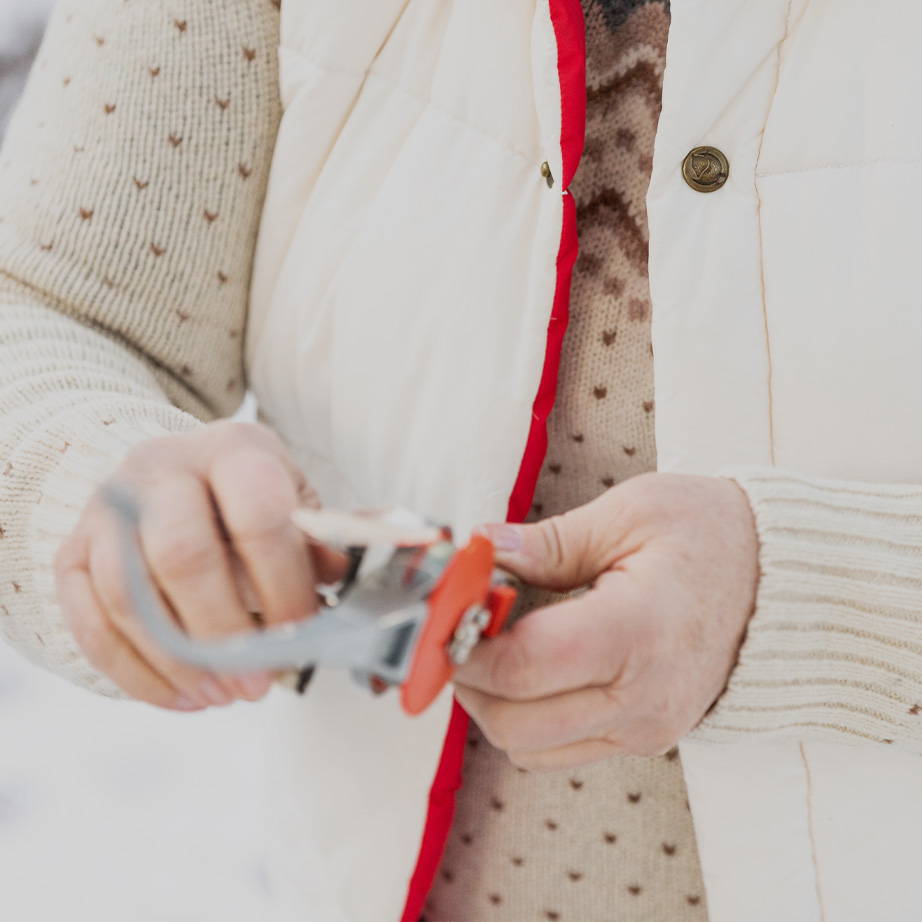 “I look forward to a completely free spring and winter. I will sit on the ice, enjoy the warming sun and drink coffee. It is said that it takes a year before you understand that you have retired. But one thing is for sure, I will enjoy the freedom.”